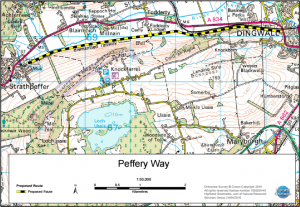 Map of the proposed path route

This is the website for a Strathpeffer to Dingwall Community Link. Following the old railway line, this would be a brilliant asset to our community.

Over 60 people and a dozen dogs turned out in support of the Strathpeffer to Dingwall Community Link on Saturday 29th August, part of the OURLAND campaign for Scottish land reform.

The event was inspired by a meeting in the community centre earlier in the year. Maree Todd, one of the organisers explained, “When we thought about local land reform issues, this path was an obvious one. It has been talked about for years, everyone in the community would like it and it ticks lots of boxes in terms of being healthy and active and sustainable transport. All of the landowners, bar one, were supportive, and that single person was able to veto the whole project. The feeling in the room was that really wasn’t fair or just, that one person could veto a project which everyone else in the community wants and is in line with government policy too.”

Supporters met at Strathpeffer’s Victorian station to walk along the old railway track, closed since the 1940s, which will form the major part of the link. The intrepid walkers came prepared with step ladders and old carpet to negotiate the barbed wire fences, and garden shears and loppers to clear the path of some of the weeds and dead branches.

Around 8 years ago the Strathpeffer Community Council produced a feasibility study looking at the need for such a path. The study identified a preferred route but difficulty over access has meant that it has since gathered dust.

Alternative routes have an increased cost and a steep incline so are less suitable for kids and wheelchairs.

The purpose of the walk was to highlight just how keen the local community are for this link to happen and to encourage everyone to work together to find a mutually agreeable solution.

One of the party who walks with sticks got stuck in the mud and fell over early on, so had to turn back. A perfect illustration of why a good quality path is needed.

One of the families on the walk live in Fodderty but feel cut off without a car. The road is not walkable, especially with children and public transport is infrequent and costly.

The route itself is beautiful, and a lot of it is well away from the main road. It would attract people to the area. It’s unusually flat for a Highland route so suitable for everyone. Cyclists could get off the train in Dingwall and get into the hills around Strathpeffer to mountain bike without going on the road and of course a fairly large population of both children and adults could use it to commute to work and school. There are bike shops at both ends so there would be the possibility of bike hire making it a real asset to tourism.

Clara Hickey, another of the organisers sums it up “Everyone we have spoken to wants this Community Link to happen. A flat, safe route, which young and old can access, is a no-brainer. It doesn’t seem right that one landowner can block a community initiative which will benefit local people and businesses.”

This website uses cookies to improve your experience while you navigate through the website. Out of these cookies, the cookies that are categorized as necessary are stored on your browser as they are essential for the working of basic functionalities of the website. We also use third-party cookies that help us analyze and understand how you use this website. These cookies will be stored in your browser only with your consent. You also have the option to opt-out of these cookies. But opting out of some of these cookies may have an effect on your browsing experience.
Necessary Always Enabled
Necessary cookies are absolutely essential for the website to function properly. This category only includes cookies that ensures basic functionalities and security features of the website. These cookies do not store any personal information.
Non-necessary
Any cookies that may not be particularly necessary for the website to function and is used specifically to collect user personal data via analytics, ads, other embedded contents are termed as non-necessary cookies. It is mandatory to procure user consent prior to running these cookies on your website.
SAVE & ACCEPT